» Thunderstorms to Roll in this Afternoon

Browse all news by category

Thunderstorms to Roll in this Afternoon 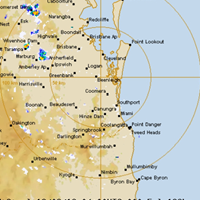 Thunderstorms are already starting to pop up on the radar, predominantly in the Somerset region. They are fast tracking East towards the coast.

The temperature is expected to soar to a sweltering 34 degrees as a maximum today, combined with 63% humidity, it makes for quite a sticky afternoon before storms arrive to cool things down a bit.

The Bureau of Meterology predicts that severe storms are likely in some areas, mainly from the afternoon and into the evening.

Severe #QldStorms with heavy rainfall and damaging winds possible across #SEQLD on Tuesday. Most likely across an area extending from the #SunshineCoast hinterland north through #Gympie & #Gayndah. Slight risk of large hail too. See your forecast at: https://t.co/DaDNVUgLwp pic.twitter.com/YtcKIrAGOC

If you’re getting tired of the incessant heat, be patient! Things start to really heat up tomorrow, with the predicted maximum of 37 degrees! From Friday, we’ll see temps staying around 30 degrees during the day and 19 degrees overnight.

Had enough of the heat yet, #Brisbane? The city has had 34 days straight of 30 degrees or more. #Heatwave conditions peaking tomorrow with 36 in the city and 40 at #Ipswich. Also 37 around #Townsville. Some cooler weather is on the way from Thursday! https://t.co/cjovXIKtUJ pic.twitter.com/taY8k0rmJs